Rathedaung is the administrative town of Rathedaung Township in the Arakan State, the westernmost part of Myanmar (Burma). It is 65 kilometres north of Sittwe, where 40 thousand Rohingyas lived in 24 villages till Aug. 25, 2017.

Since the beginning of the state-sponsored violence against the innocent,  and helpless Rohingya people in June 2012, at least 20 major casualties have been reported, while the unknown number of tragedy cases remains behind the silence. 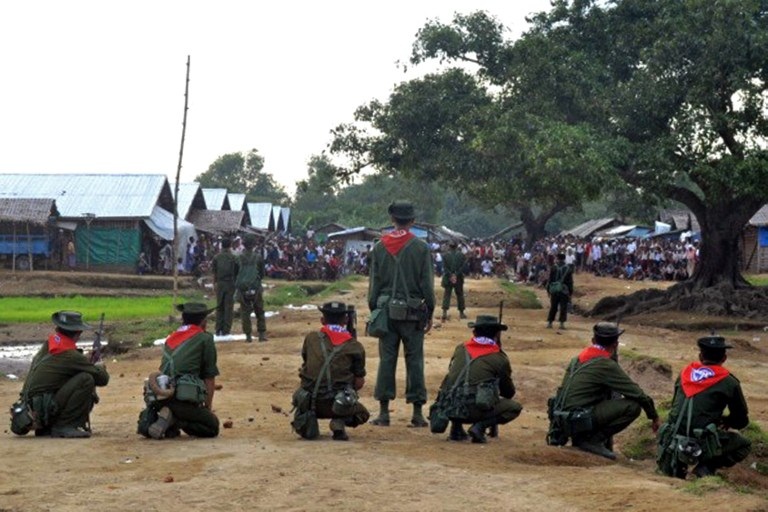 Myanmar security force personnel stand guard while a mob (background) look on following unrest at an Internally Displaced People (IDP) camp for Muslim Rohingyas on the outskirts of Sittwe town in Rakhine State on August 9, 2013. Photo by AFP

Go to top
It is true that most of the Rohingya villages are located in adjacent and in between Rakhine villages and model villages ( NaTaLa). According to some recorded documentation, on June 13, 2012, at least 35 Rohingya innocent people including children, women and elderly persons were brutally killed by the extremist Rakhine hooligans in collaboration with the Government forces. Meanwhile, 120 households were burnt to ashes in Zeekun Dan village (Kudichaung) and Karu Kun Tan village (Sera-prang).

On 19th June 2012, Anauk Pyin village was attacked and about 50 houses were burnt down. The villagers wanted to avoid the clash but 2 innocent Rohingyas were slaughtered before the eyes of the other villagers. As a result, a tense situation broke out and unavoidably, Rohingyas had to confront extremist Rakhine in order to defend their safer lives.

Later on, the Rohingya approached the authority for help but they consistently refused to protect them. On 20th June 2012, Military came to the village and carried out arbitrary arrests including women and children and bitterly tortured them. Mosques were destroyed, Holy Qurans were burnt down and women were harassed in the open sky.Among the Rohingya villagers, 185 were arrested, while 14 educated people forced out of the village issuing arbitrary warrants. Rohingyas were sent to Sittwe central prison without trial and reportedly in the half-dead situation. They have repeatedly tortured again in the jail where 4 of them had to face untimely deaths. In the same way, the village headman was severally beaten and tortured while his stomach was blown on the spot.

Since the beginning of the state-sponsored violence against the innocent, defenceless and helpless Rohingya populations in June 2012, at least 12 major casualties have been reported, while the unknown number of tragedy cases remains behind the silence. Nineteen villages were totally uprooted and 5 villages have still remained unevacuated.

On the other hand, the arrogant Rakhine and Burmese military authority looted all the belongings of Rohingya and did not even leave a match to put fire or a needle to sew torn cloths. Consequently, the Rohingya villagers met with severe hardship for their survival in all circumstances, even to cook food. Finally, the entire Rohingya villagers used an oven to cook foods in unavoidable circumstances. It is believed that other 24 Rohingya villages in Rathedaung would have been burnt down one after another had the villagers failed to properly defend the Rakhine extremists’ attacks.

Currently, innocent children, teenage girls, women, elderly persons and every individual Rohingyas are passing lives with fears and tears as the military personnel or other authority raid villages and simply arrest innocent people and loot their properties. Meanwhile, the aforesaid forces treat the Rohingya as animals with the open rape of teenage females in front of their beloved family members and harass the others. Thus the teenage girls need to pretend like old women putting lime on their hair as usual.

Go to top
On Sept. 27, 2012, a village Pin Chaw (Fraingchong) was also attacked by Rakhine from different parts of Arakan State. All the villagers fled to a Rohingya village called Chilkhali to escape mass killings leaving behind all their properties. They dared not confront the government forces and the Rakhine terrorists seeing the situation of Anuk Pin village, Then the extremist Rakhines burnt down all the houses and uprooted everything including plants and animals were also not left.

It is unbelievable to everyone that the existence of Rohingya villages in the surrounding of Rathidaung was brutally demolished.

On 25th October 2012, the village Yung Pin Gyi (Muzair) was attacked by Rakhine with the help of Military in the second round of violence occurred in whole Arakan State. Hundreds of them were killed, tortured raped and jailed but the other remaining villagers did not leave the village. It is very pity to say that their village is situated inside most of the Rakhine villages.

“We want peace and harmony and have never tried to clash with Rakhines. We always respect the law and orders of the Government but why we have been attacked and made isolated, we do not know.” – A Rohingya elder
Currently, the Rohingya dare not come out from the village. Their livelihoods and survival have become extremely hard as they can’t go for fishing, firewood collection, farming and etc. The Rohingyas in the villages of Anauk-Pyin and Muzair have been besieged and economically crippled by the majority Rakhine extremists. As a result, the United Nations’ World Food Program (WFP) has been extending minimum food rations to the starving people on monthly basis. Enroute to the Rohingya villages, the WFP often faces unexpected troubles and challenges in the hands of both arrogant Rakhines and the military forces. In one state, the arrogant Rakhines blocked the canal road as a whole by building unnecessary fence and bridge.

Based on the situation, the UN’s WFP is compelled to approach to the Rakhine community with a request to remove bridge blocking in order to have access. However, the Rakhines gave a cruel response to the agency that they would not do it because it cost them money. When WFP and some Rohingya elders in other regions said that they would compensate the Rakhines a triple amount, they have ignored the request.

Therefore, the WFP officials extended the same request to the Township Administrative Officials and the Border Guard Police Commander of the region to have access but they also simply ignored.

“Now, the vulnerable and besieged Rohingyas in the villages are going to face extreme poverty with constantan starvation as they have no livelihoods, no opportunity for self-employment and are rendered literally jobless,” said a village elder. “When the inquiry commission was sent, there was no one to talk to them in Anauk Pyin village as all the educated people have been either put on the wanted list or arbitrarily jailed. Leaving behind the fear of getting killed, someone from us talked to the inquiry commission and explained what was actually happened against us. Then the commission consoled us and came to know the reality observing the circumstances of the village.”

Similarly in Muzair, on 1st November 2012, the inquiry commission came together with a Military commander in chief Hla Myint and Ko Ko Naing. And on the following day (i.e. 2nd November 2012) commander in Chief Than Thet reached there by helicopter and interviewed some of the Rohingyas. They also explained the truth and the commission also reported the reality as it happened for the first time in the history.

Some Rohingya elders of Rathedaung from outside tried their best for the release of the innocent people jailed for 10 years and 15 years respectively without any guilty. After so many difficulties, 120 Rohingyas from Anauk Pyin village and 12 from Sera-prang were released and jail-terms were shortened for the remaining people with the cooperation of some lawyers.

The Common Rohingya residents of Rathedaung say “we want peace and harmony and have never tried to clash with Rakhines. We always respect the law and orders of the Government but why we have been attacked and made isolated, we do not know.”

In achieving “peace and harmonious atmosphere,” the Rohingya people of Rathedaung from exile are also trying to help those who are still languishing in the dire situation in the country as they are deprived of their basic needs, even to have grassroots development through all possible means of education. They are facing unexpected challenges in their daily lives as they don’t have little educated and wealthy people who could be able to assist them in the fields of socio-cultural activities, health and sanitation to motivate them by lobbying with the Government.

Saifullah Muhammad is a student of journalism in Canada and a Rohingya activist. He can be reached at saifulrohin@yahoo.com

Saifullah Muhammad is a student of journalism at Conestoga College, Ontario, Canada and a Rohingya youth activist. He can be reached at saifulrohin@gmail.com